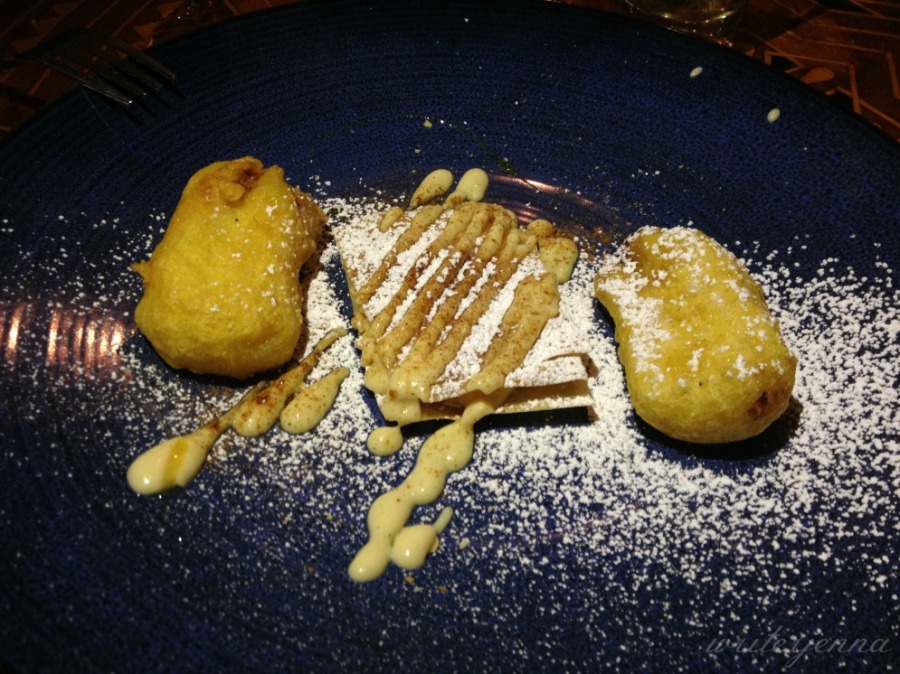 My dinner at El Mansour was a lesson in managing your expectations.

I’ve had Moroccan food, but not like this. I came here on the recommendation of a friend, who had fond memories of its bastela (a sweet pastry comprised of sugar-dusted phyllo dough stuffed with almonds and minced chicken).

The interior of El Mansour is a scene from Middle Eastern fantasies: carpets in rich reds covering every inch of the floor, cushions and low tables with interesting motifs.

My limited experience of Moroccan cuisine included lots of chickpeas, saffron, and couscous. I was ready to have my mind blown.

Does beer come to mind when you think of Moroccan cuisine? Me neither. The Casa Beer was interesting: very light with hints of spice and wheat. Interesting. It won’t replace a good IPA anytime soon, but interesting.

I was a little confused. All of the options were multi-course meals with many common courses. When the first one came out, I didn’t think it was supposed to be shared.

Cucumber, carrots, and a bunch of other stuff I couldn’t identify, served with bread (white, dense, nice squishy texture). It was fine.

No pictures of the spicy lentil soup, and though it was a little on the salty side, it was tempered by chunks of soft bread.

The next course was even better. The bastela that I’d heard so much about was as delicious as promised.

Bits of chicken with almonds and spices in a pastry dusted with powdered sugar? I loved this take on sweet-savory! This would be an excellent brunch dish.

I ordered the Rabbit Kabob specialty, which came with (ordinary) chickpeas, couscous, raisins (as though they were supposed to be a side dish…?), and a smattering of vegetables.

I had mixed feelings about the kabob – let’s ignore the fact that the kabob didn’t come on skewers. The meat was a little rare close to the bone, but was otherwise very well done and delicious.

I’m not sure what to make of this. I was a little disappointed by the sides that came with it. Maybe they weren’t so much sides as much as accompaniments for each bite of rabbit. None of them were substantial enough to be considered a side dish (with the exception of the couscous, which was pretty good). The presence of lettuce leaf and orange slice was amateurish.

To wrap up the meal, two measly pieces of fried banana with an intriguing quasi-napoleon.

The portion size of this (as well as the veggie app at the start of the meal) irked me. Let’s pretend that someone went to El Mansour solo: Would he have received a one-inch-square pastry and a ½-inch banana fritter for dessert?

Maybe it’s just as well that El Mansour provided live entertainment so that you could consume your meal distracted.

Service came in the form of an Asian waiter who speed-recited the dish descriptions in heavily-accented English, but at least it was attentive. The interior of El Mansour was comfortable and cozy, and the music wasn’t so loud as to prevent normal conversation.

El Mansour has four things going for it: the Moroccan experience, the romantic atmosphere, the belly dancer, and the bastela. The rest of the food, unfortunately, isn’t worth driving around for half an hour for street parking.